MS and the Hover Button

October 1993.  Class 94-01 was ready to take to the skies.  2LTs and WO1s, all fresh from their basic courses, were ready for Initial Entry Rotary Wing Training at Fort Rucker, AL.  Flight School.  The first day that you fly is your ‘Nickel Ride’; an folklore about the crusty flight school instructors who always said “If I had a nickel for every new student I taught…..”  During my time in flight school, most of the helicopter instructors were DACs (Department of the Army Civilians), retired Vietnam-era pilots.  Walking the flight line in the morning, you were treated to tall tales about the specific Hueys you were passing.  Rescue missions, firefights, midnight nap-of-the-earth runs, shoot downs and crashes.  Every tail number had a story to be told; the patched-up bullet holes across the fuselage lent credence to seemingly tall tales told by these men.

Jimmy Weeks was my first instructor.  He was 59 when I went through flight school, but I would have guessed he was a lot older than that.  Not the healthiest of individuals, Jimmy would have to stop once or twice on the way to the aircraft to catch his breath.  Originally from Silsbee, Texas, Jimmy was a good ol’ boy who ate two bags of Red Man chew during a flight.  That wasn’t a mistype, yes he ATE it.  No spitting— just chew and swallow.  He hacked and wheezed as he talked us through our preflight checks, and took quite a bit of time to climb into the left seat of the Huey every morning.  My stick buddy (two students rotated time at the controls every day) and I used to joke about which of us was going to give Jimmy CPR that day.  We answered that with “Rock-Paper-Scissors” as part of our preflight ritual.  After two weeks of ground instruction I wondered how in the heck he ever got to fly, let alone become an instructor for Army Aviation.

After preflight we started the engine and Jimmy lifted that 30-year old bird one foot off the pad and held it there.  You would have thought we were still resting firmly on the ground and not hanging in midair with two rotor blades spinning, beating the air into submission.  “The hover,” Jimmy squealed in his distinct southern 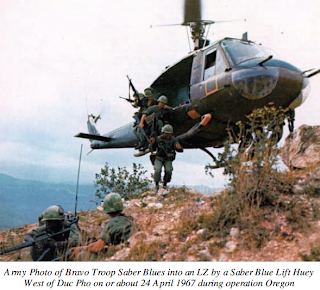 accent, “is the most important maneuver you’ll ever learn.  If you can do that, you can do anything.”  Right then, I learned that Jimmy Weeks was more at home in the seat of a Huey than anywhere else.  I found out later that Jimmy was a retired LTC who commanded B Troop, 1/9th Cavalry Regiment, 1st Air Cavalry Division in Vietnam in ’67-68.

What that man repeatedly did is now part of 1/9 Cav lore.  And it all started with the hover.  Jimmy continued, “this is the hardest thing you will ever have to do in an aircraft.  10,000 totally unrelated moving parts, constantly working against each other, and it’s up to you to make them purr.  Find it.  Once you find the hover button, you will never forget where it is.”

The hover button is that magical place where everything becomes manageable.  After Jimmy’s demonstration of perfect harmony we went out to the training area.  For the next two hours, he scared me in ways I never thought possible.  He’d start us out flying straight and level.  The instant I took the controls, that helicopter was all over the sky.  Just before I put us into an ‘unrecoverable’ position Jimmy would take over: “I have the controls.”  Then, just as quickly as I lost control, he found that hover button and we sat idle in mid-air.  We were hanging in a training field perfectly still, only the gentle rhythm of the blades.  Perfectly still…except 50’ above the ground.  “All right, LT.  You ready?  Let’s see if you can find the hover button.”

As if I was issuing my own death sentence I uttered “I have the controls.”  For the next 20 seconds, I rode that beast.  Up, down, backwards, sideways.  I did everything BUT hover..  Jimmy just sat in the left seat and loudly let out his signature “Yee Haah!” over and over…. until we were again nearing that ‘unrecoverable’ point. “I have the controls” was all he had to say.  As if that Huey heard his command, she stopped again in midair.

Eventually I found my hover button. 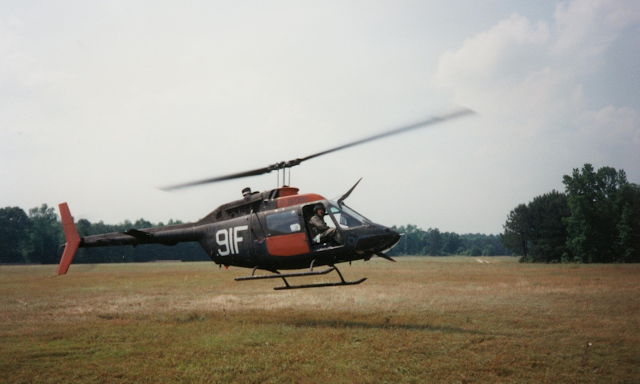 Once I found it, everything else was second nature.  You know the statement “it’s like riding a bike”?  Well, riding a bike has nothing on a hover button!  Once you find it, everything becomes easy; or maybe I should say easier.  Or should I say that now I was able to focus on the really tough stuff.  I transitioned from the UH-1 Huey to the OH-58 Kiowa, then finally to the AH-64 Apache.  Flying, shooting and leading air missions was the really tough stuff, knowing that you had found the hover button was a constant reminder that anything was possible.

It’s a great lesson in life: everything has a hover button.  The point at which the insanely difficult becomes mundane and easy, allowing you to focus on the really tough stuff.  It’s a great reminder in life.  I’ve used the reference many times; it was just as applicable holding an aircraft in midair as it was potty training my three-year old daughter earlier this year.  She found her hover button and no more diapers!

In 1999, I crawled into the cockpit of an Apache at Camp Eagle, Korea.  New to the unit, I was flying with an instructor pilot.  CW3 Jamie Henry transferred the controls and I taxied out to take off.  Smoothly hanging the aircraft a foot off the ground, I calmly said “I wasn’t sure how easy this was going to be.”  That startled Jamie a bit since he forgot that I was getting back into the air after being grounded for 2 1/2 years.  A car accident with a nasty head injury kept me out of helicopters for a while.  The hover button let me focus on the tough stuff: nighttime flying in a foreign country.  That was fun.

One theory of MS is that we are pre-disposed to the condition.  Genetic factors, supposedly.  Certain physical traumas can trigger your first exacerbation.  Any doctor who reviews my medical records would say that the car accident triggered my MS.  Maybe.  Three months after that flight was my first attack that prompted my diagnosis.  As quickly as my aviation career resumed it came to a permanent halt.

Now I have a problem.  MS has no hover button.  The difficult foundation, the most basic challenge by which everything else is built on, changes just as I think I am getting the hang of it.  It seems that basic everyday function is too often the really tough stuff.  I deal with walking, speech, swallowing and vision instead of focusing on my family, friends, life and career.  The easy stuff is not supposed to be hard.

I was home the other week cleaning up toddler toys.  Struggling to lift my arms up and place toys on the shelf, all I could hear was Jimmy.  That distinct “Yee Haah!”—as I wrestled little plastic cars and farm animals—was as loud as on my Nickel Ride almost 20 years ago.  I smiled.  Jimmy didn’t take the controls from me; I only assume he didn’t think I had reached ‘unrecoverable’.

MS has no hover button, or maybe it does.  There must be something out there to make the easy stuff…well, easy, letting me focus on what’s difficult.  I just need to find it.  I will!

Jimmy Weeks passed away in 2008.  An aviation legend who continues teaching me lessons to this day.  .  On those tough days when I struggle to get past the basic, Jimmy still reassures me.