Since last year’s battles with multiple sclerosis, I’ve found that I have a hard time with many common activities: just the other day I couldn’t outrun Eleanor while playing tag in the backyard.  She’s adorable, but it’s still disheartening when my three–year-old daughter is faster than me.

That’s just one of the activities that I can’t do these days.  I won’t bore you with the entire list but it includes many things that I used to find great joy in:  running, hiking, swimming, sometimes even just walking a block can feel as strenuous as my toughest Army days.

MS is relentless.  I never get a break from its effects.  Whenever I feel like I have overcome one challenge, it comes back with much more vigor.  As soon as I grow used to one difficulty, another will soon pile on, making it all rather overwhelming.  Frustrating hardly begins to explain my feelings.  To not be able to do what was once as routine as taking a breath…that’s a difficult change to accept.

My options are pretty limited these days.  In fact, there are only two available to me when simple tasks become insurmountable:

I do them anyway.  My Father’s Day from Brie was to go hiking.  The Angel’s Rest hike in the Columbia Gorge is 4.8 miles round trip with an elevation gain of about 1,450 feet.  I easily conquered this hike many times in the past.  The last time Brie and I hiked Angel’s Rest, I carried our daughter in a pack on my back.  This time, I made it about a third of the way before my leg just couldn’t do any more.  I pushed as hard as I could before it was no longer safe.  We drove back to Portland without saying much.  I felt proud of what I did and also frustrated over what I couldn't do.  Before I toss my hiking boots and trekking poles I will look over the ridge of Angel’s Rest again.  I have no other choice. 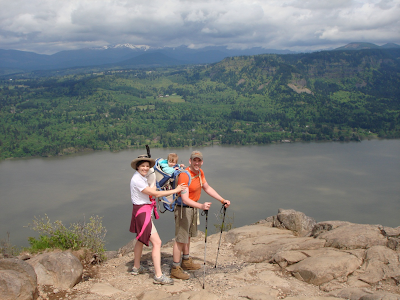 I do what I can.  Besides running, hiking and swimming, I used to bike a lot.  Then came the time when I could no longer hold on to the handlebars safely.  So I traded in my road bike for a recumbent.  Then I couldn’t keep my balance on two wheels.  So I traded in again, this time for a recumbent trike.  Last year I rode the 202-mile Seattle to Portland ride as well as 88 miles of the National MS Society’s BikeMS Oregon, climbing the 4,503’ of elevation gain through the Willamette Valley and Oregon Wine Country in triple-digit heat.  That was an amazing triumph over a tough round of MS issues and hospitalizations.  But, alas, that was short lived as I was soon to be back in the hospital just two months later.  That was November.  By the time March came around my MS had taken its toll again.  The thrill of those long bike rides just ten months ago is long gone.

So I did what I could.  I changed my diet and daily lifestyle with a focus on my health and recovery.  Next, I got back into the gym to see what I could do.  I rode the stationary bike.  All I had in me was 10 minutes, going pretty slow, but that was a stake in the ground.  For the next few weeks I rode faster and at a harder resistance, back to the training rate that I was up to last year.  Now, I need to work on my time.  10 minutes became 15, then 20, then 30.  When I extended my time, it took a while to get back to last year’s training rate.  When I got there, I extended it again.  30 minutes became 45.  Last week I rode strong for an hour.  The week before that I took my recumbent bike out and rode 25 miles.  My goal is next month’s BikeMS Oregon.  I’m no way near where I was even last year, but I am doing what I can.

There is no other option. 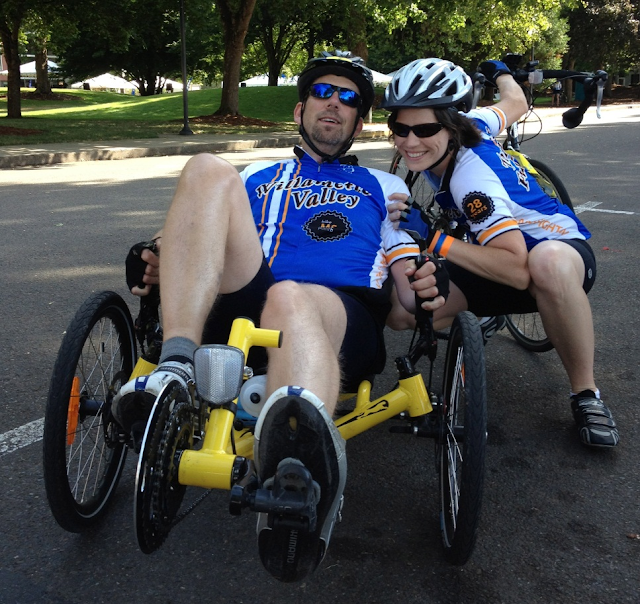 So this year my goal is to ride, just ride.  I’m not sure how far or how fast, but I will ride.
I’ll ride to increase awareness of my fight and everyone else’s who battles this disease.
The fight is not over and it won’t be over until a cure is found.
It will never stop…nor will we
It will never quit…nor will we
This is why we ride!
brieandkevin.com/bikems
Kevin Byrne - Portland, OR
www.brieandkevin.com