Everyone who has worn a uniform has those fiends.  You shared the same wins, losses, doubts and fears together as you sweat and climbed the same mountains.  Everyone who had worn a uniform knows about those true friends; bonded for life regardless of what happens next.  When I was diagnosed with MS in 1999 absolutely everything in my life changed in an instant.  Everything, this is except my friends.  This is a story about three men who changed my life by committing that my MS changed nothing.

I met Bo, Ho and Dougie all on the same day.  June 28, 1989.  R-Day; reception day for the incoming class of 1993 at the United States Military Academy.  West Point may be a prime mark of military success for young men and women, but on June 28, 1989 it was a spastic day for at least four boys.  Coming from very different backgrounds from across the country, we were now expected to conform to one crisp standard.  Together & with the rest of our new platoon we made it through R-Day.

That first day carried on through that first week, month and finally the end of our first year.  We stumbled through, carrying each other and being carried.  Plebe year at West Point.  We were seasoned; no longer wide eyed and naïve.  At least that is how we saw ourselves in the world.  We refined that crisp standard.  We trained together, studied together, and tested each other.  All the time supporting each other, physically and mentally, in the ways that you would expect brothers to support each other:
·         By challenging each other to push on faster & longer, regardless of our desires to quit.
·         By never letting up and never allowing each other to take the easier way out.
·         By finding the humor and sarcasm in everything and trivializing our fears before those fears could ever take hold.

That first year carried on through 22 more (and counting).  Separately, we have all travelled our own paths and are now in very different points of our middle-aged lives, again spread across the country.  Each of us has been individually defined by our careers, assignments, deployments, transitions, marriages, divorces, children, families, and unique life events in general.  Together, we are defined in much the same way as we have been since that June 28.  Every step of the way is marked by some story we’ve told a thousand times already.

We talk as often as we can.  Sometimes more, sometimes less than we would prefer.  Every year, though, we gather.  Guys’ Weekend.  Our excuse to put aside our worries and concerns about life and enjoy time with each other.

Bo, Ho and Dougie know all about my disease and the ongoing litany of issues, hospitalizations and medications.  Sometimes we talk about it, usually because I am taking the opportunity to vent a bit.  But on Guys’ Weekend, I put all that aside in favor of the random banter, beer drinking, cigar smoking, good time crisp standard that we all maintain!  Not quite the same STRATC young men we were, but we can hold our own.

What’s so special about Guys’ Weekend?  For me, it’s the only group where I don’t have MS.  Sure, they know I have the disease.  They know about (and see) all of my issues and treatments.  For me, they don’t see that.  Bo, Ho and Dougie treat me exactly the same way as they always have, as one of them.  No more and no less.  Most important, no different than ever.  I can honestly say, besides these three men there is no one else whom I can say that about.  For someone with MS, being treated like everyone else can be the greatest feeling in the world.

I let Bo into my MS world this summer.  He rode with us in this year’s BikeMS fundraiser here in Oregon.  This is the world where I am Kevin: team captain of Team Amulet and one of the faces of MS.  For me, the angst preceding the weekend on my part was unwarranted.  He happily rode and celebrated with us, all the time surrounded by sites and stories of MS.  In the end, regardless of what he saw or heard I was still KB.  Nothing changed. 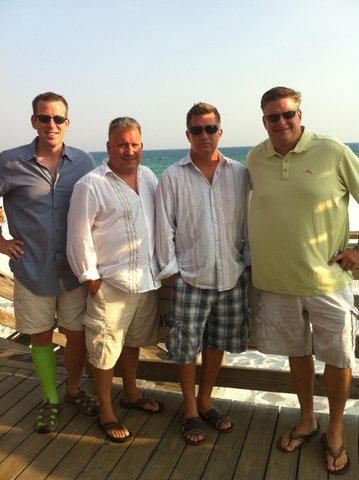